Woman Gets Her Life Back After Series of Vascular Surgeries

After a friend referred Mary to Charles S. Thompson, M.D., F.A.C.S., a board-certified vascular surgeon at Vascular Specialists of Central Florida, her life changed. Before meeting Dr. Thompson, Mary couldn’t walk very much on her own due to the pain caused by peripheral artery disease (PAD).

What Is Peripheral Artery Disease?

Peripheral artery disease (PAD), is a condition in which blockages appear in the arteries that carry nutrient-rich blood to the head, organs, and limbs. PAD most commonly occurs in the arteries of the leg.

When gummy plaque builds up in the arteries (a process known as atherosclerosis), it can thicken over time and impede blood flow to the vital organs and limbs, leading to leg pain and problems with walking.

As it progresses, the blockages can get worse, resulting in pain at night, as well as ulcers that don’t heal properly.

“Mary originally came to our practice because she was having problems walking,” says Dr. Thompson. “She was a very active individual, but over time, began to have difficulty with walking distances and began to develop leg cramping that got progressively worse even with medication treatment.” 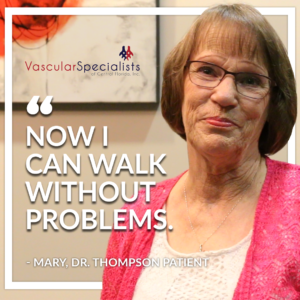 Many people who have PAD do not experience any signs or symptoms. For those who do, they may feel discomfort, numbness, and aches in the legs or they may experience cramping in the legs, hips, buttocks or feet, particularly while walking or climbing stairs. Symptoms usually subside with rest. An unhealed ulcer on the toes can signify the development of PAD. Untreated ulcers can lead to gangrene, and therefore, need urgent medical attention.

Other indicators of PAD may include:

For Mary, frustration over her primary caregiver’s inability to effectively diagnose and treat her led her to research and self-diagnose on her own. “I’ve been with Dr. Thompson since 2006,” says Mary. “I have vascular disease, and the reason I found that out was I had a mini-stroke. I was reading a pamphlet on peripheral artery disease, and I said, this is what I have. I was 75% blocked. I could not walk, and it hurt every time I had to walk. It was bad.”

After a friend referred Dr. Thompson, Mary’s frustration soon turned into elation. “Thank God (my friend) sent me here because Dr. Thompson is awesome,” says Mary. “He cares. That’s the biggest thing in my book. I’ve seen so many doctors who think they’re better than anybody else, and he doesn’t. Dr. Thompson sits down with you, and he draws you pictures. He explains to you what’s going to happen.”

Treatment for peripheral arterial disease can be medical or interventional. Medical treatment emphasizes alleviating symptoms and stopping any further development of the condition.

Changes in lifestyle can go a long way to slowing the development of PAD, or even reverse its symptoms altogether. They include:

Advanced treatments for treating more serious symptoms involve removing or opening up the blockages in the arteries, which enhances blood flow to the legs. This can be achieved through balloon angioplasty, placement of a stent (a small mesh tube), or surgical bypass.

“After discussing her symptoms with her and the various options concerning treatment, Mary opted for a procedure where we performed a bypass to the legs,” says Dr. Thompson. “And this helped with blood flow getting to the legs and improved her circulation.”

“And we were able to work out a strategy that involved lifestyle modifications, things that she could do to prevent the blockages like the cessation of smoking. Mary did quit smoking, and she embarked on an exercise program where she began to walk more frequently. And with some other procedures, we were able to get her to a point where she was comfortable and could return to most of her activities throughout her life.”

Mary applauds Dr. Thompson and the success of his targeted treatment plan on both the medical and lifestyle modification levels. “I haven’t had surgery in two years, and I’m very excited about it,” says Mary. “I had to have surgery every year, sometimes twice a year because I had so much blockage. I was a smoker, but no longer. It took me quite a while to quit. Dr. Thompson kept telling me: you need to quit, you need to quit. And now I figured out why.”

Mary is also quick to acknowledge the role the entire staff at Vascular Specialists of Central Florida played in her successful health journey. “Dr. Thompson doesn’t treat you like a number; he treats you like a person,” she says. “But everybody who works here has been awesome from the techs who do my scans to the people up front.”

“Today I came in, and Dr. Thompson had emergency surgery and was running late. They sent me to have lunch and come back. I did, and here I am. It’s just really accommodating, and I appreciate them very much.”

Grateful for reclaiming her life and living pain-free, Mary emphatically recommends Dr. Thompson to anyone suffering from what she went through.

“Dr. Thompson is the best. You can’t get any better,” says Mary. “Thank you, I mean what else can I say? He’s done so much for me. I don’t know where I’d be without him. I have recommended many, many people. I said, don’t go anywhere but here. I know there are probably other doctors out there, but they’re not Dr. Thompson.”