What to Expect After an Aneurysm Diagnosis

Richard Teed, M.D., a board-certified vascular surgeon with Vascular Specialists of Central Florida says one of the most common questions he is asked is what to expect after an aneurysm diagnosis.

“I tell patients the most common location of an aneurysm is below the arteries that go to the kidneys,” he says. “An aneurysm is a disease that is normally caused by age as well as cigarette smoking, although occasionally family history plays a part.”

An abdominal aortic aneurysm is the result of an artery above the pelvis and below the chest expanding or dilating to more than one and a half times its original size. Aneurysms usually grow slowly and are asymptomatic at first, which can make them hard to detect. Some aneurysms will never rupture.

Other risk factors for abdominal aortic aneurysm include:

Symptoms of an aneurysm usually do not present until it ruptures. If the aneurysm bursts, patients may experience:

If not detected and treated in time, abdominal aortic aneurysms can rupture and allow blood to spill into the body. Abdominal aortic aneurysms are responsible for about 4-5% of sudden deaths in the United States annually. It is critical for patients who have either received an aneurysm diagnosis or suspect they may have one to recognize the symptoms and consult with their vascular surgeon about treatment options right away.

How is an Aneurysm Treated?

The primary goal in treating an aneurysm is to prevent the aorta from rupturing. Once an aneurysm is identified, a vascular surgeon will devise a treatment plan based on its size and growth rate. Patients with smaller abdominal aortic aneurysms (less than 5 centimeters in diameter) with no symptoms can usually employ more conservative treatment options such as quitting smoking, beta-blockers, aggressive blood pressure control, and regular imaging tests to monitor the growth of the aneurysm.

“The major criteria for when we decide to fix an aneurysm is based on the size, and for most patients, that range is five and a half centimeters,” Dr. Teed explains. “The two major modalities we use to treat aneurysms are minimally-invasive or endovascular surgery and open surgery, which are the two most widely used aneurysm treatments in the United States today.”

During minimally invasive endovascular surgery, a vascular surgeon will attach a stent graft to a tiny catheter and insert it into the leg through a small incision in the groin and weave it upwards to repair the aorta. The graft helps to reinforce the damaged part(s) of the aorta, enhances blood flow, and prevents future rupturing. An open aneurysm repair involves making an incision in the abdomen and replacing the aneurysm with a graft.

“Minimally invasive endovascular surgery involves making small incisions in the groin and repairing the aneurysm from the inside out using a stent graft,” says Dr. Teed. “The graft consists of metal of varying components as well as fabric to reline the blood vessel. The open surgical method is called an open aneurysm repair where we make an incision from top to bottom on the abdomen, open up an aneurysm, and replace it with a graft that we physically sew in.” 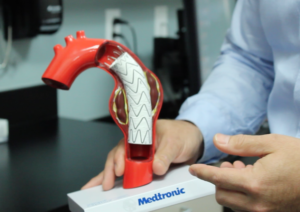 The recovery timeline for an aneurysm treatment largely depends on which type of procedure is needed. “The recoveries are quite different,” says Dr. Teed. “You can expect a quick recovery with an endovascular aneurysm repair which typically involves spending a few days in the hospital followed by home rest for the next several weeks.”

“The inpatient stay for an open aneurysm repair is typically around five to seven days followed by several more weeks of rest at home. The thing to keep in mind with both of these repairs is that they do require lifelong surveillance, initially with CT scans and then switching to ultrasounds when everything is looking good.”

Patients should refrain from any behaviors that may have increased their likelihood to develop an aneurysm in the first place, such as smoking, having an unhealthy diet, or a sedentary lifestyle.